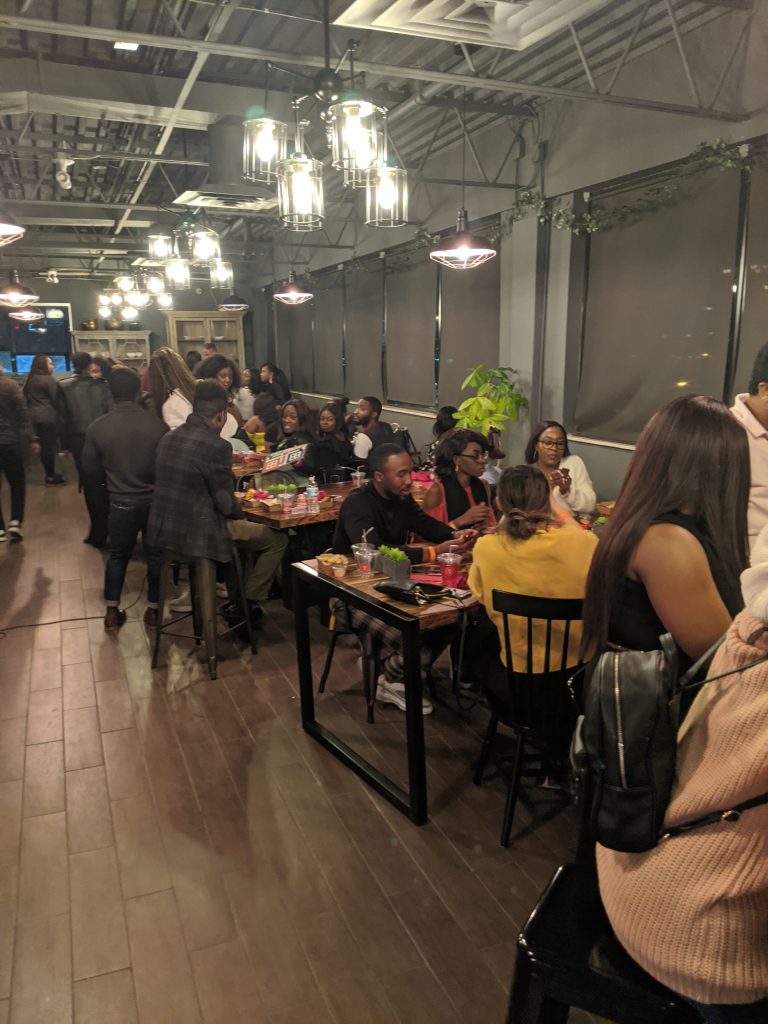 Best Shawarma TO hosted a naija tasting pop-up experience at Kitchen 24 on Saturday Dec 7th. Admission for the event was $20 and that included a free cocktail and a “Juicy Box” which consisted of Suya wings, fried, and a mini grilled corn.

I arrived at 6:45pm and was welcomed with good vibes. There was a DJ playing music, and each table was set up with games for entertainment. The bar was set up with the free cocktail and I picked up one as I waited on my juicy box.

I finally got my juicy box about 40min after .The box was paired with a spicy mayo mix that complimented the box. Everything in the box tasted so good but my favourite had to be the corn, probably a bias choice just because I love grilled corn.

The menu consisted of Shawarma with either beef, chicken, goat, or beef/chicken combo or the same thing as a bowl for $10. I opted for a spicy goat Shawarma because I’ve never had that combination before. To order, we had to order online on bsto.ca.

While we waited for the fresh Shawarma, I occupied my time with a few table games. I played WHOT for the first time which I learned is the Nigerian version of UNO, and I watched along as people played LUDO as well as JENGA.

The special entertainment for the night was singer-songwriter Zene Soul. She played a few of her original music as well as one cover.

The founder of Best Shawarma TO, Andrew came out and gave a little speech of appreciate.

As the night went on, Shawarma orders started to finally go out. It was a little slow as the event was SOLD OUT and over capacity. I finally got my Shawarma about 2 hours after my initial order. The shawarma had a spicy mayo sauce and it also included a sausage which was a surprised as I bit into the Shawarma. I have to say that I found it very tasty but I wish that it was a little fuller or a slightly bigger portion as I wasn’t 100% full.

Overall the energy was great, the vibes were on point, the people were fun, and the food was good. The only thing I would change is probably the service.

You can order Best Shawarma TO on Ubereats or SkiptheDishes on Saturdays and follow them on instagram to look out for their next event.